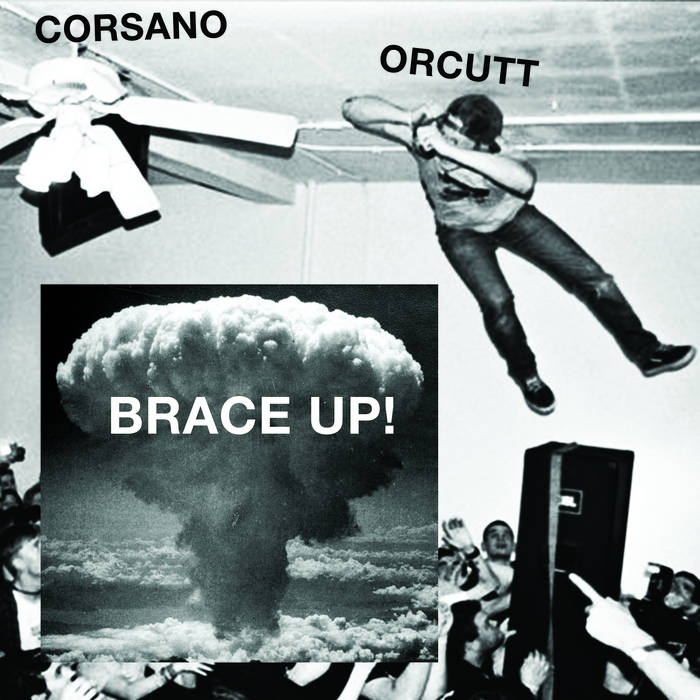 To order the LP : bit.ly/2MYyYqb

Brace Up! is the first ever studio release from the duo of Chris Corsano (drums) and Bill Orcutt (guitar). Recorded in Brussels at Les Ateliers Claus by Christophe Albertijn on March 19th and 20th, 2018. Stage dive photograph by Jason Penner.

"Over the past six years or so, drummer Chris Corsano has proven to be one of Bill Orcutt's most reliably flexible collusionists. Regardless of whether Bill is cluster-busting electric guitar strings, weaseling around with cracked electronics, or playing relatively spacious free-rock, Corsano is able to provide the proper base for his aural sculpting. A lot of Orcutt's instrumental work has traditionally felt hermetic even though he's exploring caverns of explosive ecstasy. One often got the impression Bill was operating in the way John Travolta did in the classic 1976 ABC television drama, The Boy in the Plastic Bubble. Orcutt's actual interaction with collaborators emerged not from communication so much as pure observation. While he was fully cognizant of his musical surroundings, his reactions to it were walled off. This approach did not encourage sonic dialogue so much as parallel streams of discourse. These streams could interact with each other, but not in particularly standard ways. On Brace Up! , their first ever studio release, this precept has changed considerably. Whether it's a function of emotional familiarity or an intellectual choice I dunno, but there's a whole new kind of duo exchange going down on this record. Bill and Chris are clearly playing off each other's moves throughout the album. And it really raises the level of the music to an all-time high. From the cop car see-saw of 'Poundland Frenzy' to the mutual pummeling of 'Paranoid Time' (possibly a Minutemen tribute?) to the lazychicken- gets-stung-prog of 'She Punched a Hole in the Moon for Me,' the sounds on Brace Up! display a constant flow of ideas and instantaneous conjugation of newly forged verbs. As great as Bill and Chris's previous duo records have been, this one's greater." -- Byron Coley